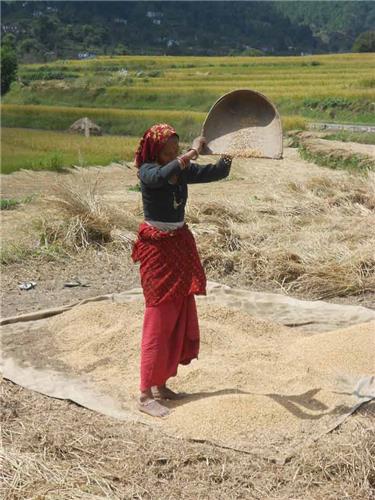 Apart from Gujarat and Bihar, Uttarakhand happens to be one of the three fastest growing state economies in the country. According to the data provided by Central Statistical Organization, the growth rate witnessed in the Gross State Domestic Product (GSDP) of Uttarakhand during 2011 was 9.31%, while its real GSDP rose by 13.7% (Compounded Annual Growth Rate – CAGR) during the 2005-2012 period.

The State Per Capita Income in Uttarakhand has been pegged at Rs.82,193/- for FY 2012, which exceeds the national average of Rs.60,603/- (FY 2012). It is generally agreed that the New Industrial Policy for Uttarakhand, announced by the Central Government in 2003, offering generous tax benefits on new investment led to this enormous rise because of significant investor confidence. Not only domestic investment, this new Industrial policy was able to attract a substantial FDI of US$ 46.7 million up to October 2009, as per data released by the Reserve Bank of India.

As elsewhere in India, Agriculture remains the predominant sector of Uttarakhand Economy. The major crops produced in this state are Basmati Rice, wheat, coarse cereals, groundnuts, soybeans and sugar cane, pulses and oilseeds etc. It is generally accepted that the world famous, highly aromatic Basmati Rice is an original native of this region, though it is now produced in many regions of the country, apart from other locales globally. Regrettably, due to its mountainous topography, the local per hectare agricultural productivity is much less compared to the national average, with almost 86% of all croplands located in its plains region.

On the other hand, the invigorating mountain climate has helped this state to emerge as a leading producer of non-seasonal vegetables ranging from peas and potato to cabbage and cauliflower to tomato and quite a few others. Apart from these primary agricultural products, a large number of orchards in Uttarakhand produce various fruits like apples and apricots, pears, peaches and plums, oranges and litchis, while it has become a leading producer of such non-traditional fruits like strawberries in recent years. The local production of fruits has over the years provided a fillip for growth of a large fruit processing industry in the state, apart from supporting an indigenous apiary industry (beekeeping).

Due to the presence of major rivers like Ganga and Yamuna emerging from Uttarakhand, Uttarakhand is bestowed with a remarkable potential for generation of hydropower at every scale ranging from such mammoth projects as the Tehri Dam to mini and micro projects capable of producing hydro-electricity for a remote village with 50 households. This sector has attracted major organized investment from the central and state governments, apart from the private sector since the declaration of this state.

The tourism sector in Uttarakhand is one of its major sources of income, with a large number of pilgrimage centers, leisure and adventure tourism destinations, apart from its national parks and sanctuaries. For a small state with a local population of around 8.5 million only, it attracts a tourist population thrice this number, which offers direct employment to large number of its upcoming generation.

Uttarakhand boasts of 65% of its gross geographical area under forest cover. This forest region is home to a rich biodiversity, with a multitude of plant and animal species, many of which are endangered. Once upon a time, the local forests provided critically required logs for railway sleepers for railway expansion almost all over the country. However, with extensive denudation, the stress today is more on forest conservation then on timber extraction.

As a result, major chunks of local forests are now reserved under various national parks and sanctuaries ranging from the renowned Jim Corbett National Park to Valley of Flowers to Nanda Devi Biosphere Reserve to the Rajaji National Park. Though not comparable to earlier times, but the local forests still provide significant timber of commercially important varieties like Deodar, Oak, Pine, Sal, Teak and Bamboo. However, these national parks and sanctuaries are today major source of income not for the timber but as major tourism destinations.

Right since ancient times, the Uttarakhand region has been known for its medicinal plant wealth, particularly for the species which grow wild at high altitudes. The legend of Ramayana hero Hanuman visiting the Himalayas for the mythical ‘Sanjeevni Booti’ to cure Lakshman is a part of popular folklore. Various government and non-government efforts during the last decades have resulted in conservation and multiplication of many endangered medicinal plant species. The traditional practice of collection of wild herbs and medicinal plants from the local forests offer a major employment avenue for the local villagers.

Apart from traditional agriculture and horticulture, Uttarakhand is emerging as a major hub for production of various flowers. Due to presence of such major religious centers like Haridwar and Rishikesh, the surrounding areas were producing such traditional flower species like marigold and roses since ancient times, but the last decade has seen the emergence of various non-traditional ornamental and exotic species to cater to a fast growing export demand.

Tea cultivation was initiated in Uttarakhand way back during the British period in view of its suitable climate. Apart from the establishment of major tea estates around Dehradun city and elsewhere in the hills, a large number of tea processing factories were also established at that time. At one time, tea produced in this region was considered as one of the best in the country. However, during the economic turmoil related to 2nd World War, the local tea industry gradually lost its cutting edge and languished. This activity has however been resurrected since the emergence of the new state with the establishment of Uttarakhand Tea Development Board.

Uttarakhand houses a number of important minerals like Limestone, Rock Phosphate, Gypsum, Soap Stone, Copper Graphite, Magnesite and Dolomite etc. which adds to the gross domestic product, apart from offering direct employment to a large number of its population. Apart from these, quarrying for stones, boulders and sand, which are extracted from its various seasonal rivers, offers regular employment to a large number of people as adjunct to the bustling building construction activity.

Apart from the factors mentioned above, Uttarakhand has been home to some major industries like Cement plants, electrical engineering, pharmaceuticals, textiles, food processing and arms and ammunition.

Since the notification of new industrial policy for Uttarakhand, the state government has initiated major efforts to promote seven integrated industrial estates through SIDCUL at such spots like Pantnagar, Haridwar and Sitarganj and a Pharma City at Selaqui (Dehradun). Additionally, an Information Technology Park was promoted in Dehradun on Sahastradhara Road. These initiatives have helped promote Uttarakhand as a major hub for IT, ITES, Pharmaceuticals, Biotechnology and Automobile Industries.

With a flourishing tourism sector and a budding economy, the transport sector is the most crucial sector of Uttarakhand economy which ensures a well-lubricated flow of all goods, services, tourists and manpower round the clock.
12926