Culture refers to traits, predominating attitudes and behaviour that set apart the functioning of a group or community of people. There are many factors that influence the culture of any particular region. History, religion, national or regional identity and geography are major attributes which play a key role in the evolution of any culture. Cultural development of a place largely depends on where it is situated. The culture of Uttarakhand displays considerable variety. There has been an evident amount of cultural diffusion in this area owing to it being a part of Uttar Pradesh for a long time. Hence, one can see both, the long-cherished traditions being preserved by the natives, along with a few influence from the migrants settled. 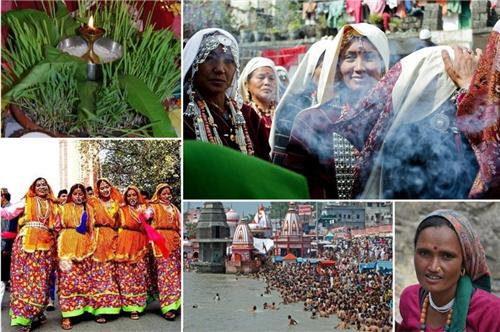 The Pahari culture has arisen and evolved in a great variety of physical settings that differ in climate, vegetation and landforms. Hence, we can see that the natives have developed adaptive strategies to satisfy their needs.
Did You Know?
Stone pelting is a part of a fair in one of the districts of Uttarakhand. Weird! but fun to watch. Don’t forget to put on your helmets and witness this age old tradition. Invoking of ancestral spirits and witchcraft is still practiced here.

Folk dances and music are an inherent part of the people of Uttarakhand. It is often seen as giving form to their innermost soul and emotions. The mere sound of the gushing streams, the green canopy, the whistling of the breeze, colourful blooms remain inspiration enough for composing a perfect tune. Tourists often flock the place during festive seasons to experience the rhythmic moves and soulful renditions.
Some of the interesting ‘Folk dances’ of this region includes:

This folk dance is performed by men folk. This dance form is mainly performed in the Tehri region. It is done using a long Bamboo pole, while the performer executes his acrobatics, balancing himself on top of the pole, in rhythmic movements. A band of musicians with instruments plays along side. It is amusing to watch the performer exhibit such great energy, agility and balance.

Associated closely to farming, this is a seasonal dance. It is showcased during the cultivation of maize and paddy in the fields. Derived from ‘Hurka’ meaning dance and ‘Baul’ which denotes the drum, which is accompanied with the song. The farmers, form two rows and sway to the songs being sung. The song generally narrates about the heroic deeds and valor of the people.

It is performed by girls and boys clad in their traditional costumes. Religious and important social occasions are the time when one can witness this form of dance.

Performed by men with swords in a procession wherein the bride is taken to the bridegroom's place after marriage. A typical dance form pertaining to marriages, which exhibits valorous and brisk moves.
Interesting Facts

Uttarakhand has two main regions Garhwal and Kumaon regions. The most notable aspect of the folk tour of Kumaon is the intriguing wall paintings popularly known as Bar-Boond. Floral designs are a common pattern in these art forms and are really splendid.

Wood carving is another popular folk art that is simple and beautiful. The openings of the doors and windows are carved with floral patterns on it. In Garhwal and Kumaon region you can come across some houses with the façade of their upper houses being decorated with wood carvings.

A dance which is performed by the Bhotiya tribes, during the death ceremony. It intends on liberating the soul of the dead person.

This is a musical dance-drama, generally performed during the Dussehra and Diwali. All the plays have Mahabharata as the storyline.

A group dance performed by both men and women in a semi-circular pattern. The significance of the moves is that the pace of the dance keeps increasing gradually reaching a pandemonium.

Performed during the month-long festivity in the air, with the arrival of spring and Holi. Many beautiful compositions are rendered, accompanied with musical instruments and graceful dance movements which clouds the atmosphere with gaiety and colour.

A very romantic dance, performed by couples. While the female carries a mirror in the left hand, and a colourful handkerchief in the right, she sways gently to the rhythmic music. The male carries a hudukka on his left shoulder, and accompanied by his mates playing different musical instruments.

Music finds a special place in the hearts of the Paharis, it is an embedded part of their culture. It provides them a platform to vent their feelings. It is also used as a medium to invoke
God.

Few of the Folk songs and Folk Lores that are common in Uttarakhand are:

A seasonal folk song, which welcomes the spring season, when everything around comes back to life. The composition of these folk songs are:

These are love songs composed in the form of question and answers. It is sung by men and women.

These seasonal folk songs are sung along with the ritual chanting during a marriage ceremony.

These songs depict the pain of separation. A wife from her husband, it narrates the pain she goes through during this separation. Khuded can further be classified into Laman and Pawada. Pawada is sung by wives who send their husbands to battlefields and keeps waiting for their return looking at the horizon.

A composition which spins around the shepherds, wherein the old people belonging to this community give advice to the younger shepherds. They share their experiences, anecdotes all in the form of songs.

An age-old practice of invoking ancestral spirit through songs and instruments. At times, it is also accompanied by dance. The spirit is often invoked to seek remedy. It is performed by a trained priest, who sings and the people gather around. The whole atmosphere is intense, filled with tumultuous music, chanting and singing.

Many religious and regional festivals mark the calendar all through the year in Uttarakhand. The fact that it was a political union with Uttar Pradesh for a most of the 20th century and early 21st too, U.P. has had great influence on the culture and religious gaiety of the state. Uttarakhand, thus, has a number of festivals, some typical of the hill country and many others borrowed from the plainsmen, all of which are celebrated with great enthusiasm and fervour. Like many North Indian states, Holi, Diwali, Christmas and Navratri are celebrated. Apart from these there are festivals and fairs which are native to the state and include:

Harela festival is associated with harvesting and the advent of rainy season. To mark the beginning of the festival, women folk, sow seven types of grains in the basket, and let it sprout. The seeds germinate and on the tenth day, the leaves are cut. It also serves as a test, to ensure if the seeds are of good quality. It is celebrated on the first day of ‘Shravan’. It also marks the wedding of Lord Shiva and Parvati. The Harela fair takes place at Bhimtal in Uttarakhand.

A very significant and important festival, celebrated in the beginning of the chaitra month. Young girls perform pooja and pray for prosperity of the community. It is also celebrated for a month-long period during the spring season in few places of Uttarakhand. 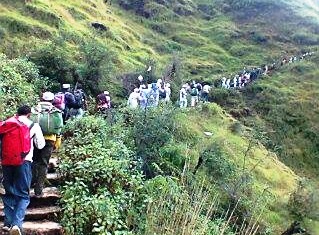 This festival is a tribute to the rivers Kali and Gori. People fast, undertake pilgrimages barefoot, take a dip in the sacred rivers and worship. Songs and dance along with the procession add zeal and flavour to the festivity.

The significance of this festival being the ripening of the agricultural crops. The land owners as a mark of thanking the labourers, who have tilled and toiled the lands, give them presents. Ghee tilak is smeared on the forehead during this celebration. It is generally celebrated in the month of August.
One can find carnivals, processions, exhibition of handicraft stalls, food stalls, dance and musical performances during these times. 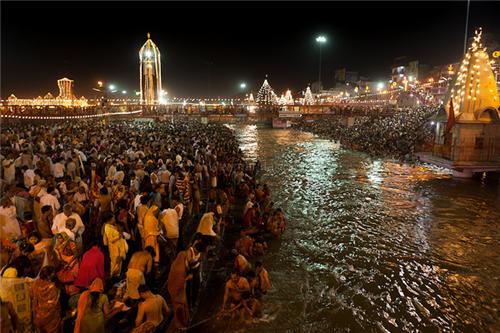 This festival brings in pilgrims, tourists from across the globe. Some to witness the grandeur and many to cleanse the souls. This fair perhaps brings the maximum number of people together for a religious purpose. Kumbh Mela is held every 12 years and scheduled at different places each time. Haridwar is considered to be of utmost importance, since it is said to be the passage or gateway to heaven.

While the Maha Kumbh Mela, which is held at four different places, once in twelve years within India is, Ardh Kumbh Mela takes place every six years. The venue of this keeps changing. It is held in Haridwar, in Uttarakhand. The spiritual aura of this religious place is further intensified during this fair. This Mela has also started to gain importance over the years. Locals and tourists come in multitudes to seek blessings and wash away the sins. Tents and stalls are erected for the devotees. Many plays are also enacted during the Ardh Kumbh Mela.

A very bizarre and quirky fair, which is held in the Barahi Devi temple in the district of Champawat, Uttarakhand. This fair is held on the day of Raksha Bandhan. A weird kind of practice exhibiting two groups of dancers and singers compete against each other not to challenge their professional prowess, but, by one group throwing stones and the other tackling it with a huge wooden shield. No one is said to have got lost their life till date in these stone pelting sessions held during the fair. It is even considered to be auspicious if one succumbs to injuries. 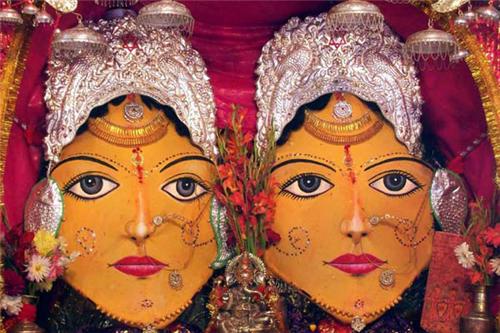 This festival was initiated by King Kalyan Chand of the Chand Dynasty. It is marked by a ritual procession carrying the dola of Goddess Nanda devi for about three weeks. People from local villages participate in the procession. This fair takes place generally in the month of September, and is held at different places each year. Nainital, Almora, Ranikhet, Bhowali, Munsiayari are few of the places where this fair is held. Once in twelve years, it is celebrated in Chamoli on a large scale. Many stalls, and make shift markets with locally produced goods, attracts many people to this funfair.
These are the few intrinsic aspects which form the base of the culture of Uttarakhand. If you want to enjoy the rich, colourful and varied culture of the land..explore the expanse!!!
Click Here to Know about the Culture of Dehradun | Haridwar | Mussoorie | Rishikesh | Haldwani | Nainital